Its MY frequency and I’ll cry if I want to

The spirit of Amateur Radio and cohabitating on our bands.

Amateur Radio enthusiasts enjoy a liberty that no other service can claim.

We have complete freedom to move anywhere within our allocations and transmit on any mode and with all the power our licence class allows.

This is a privilege afforded us on a global basis.  Every licence class enjoys this privilege subject to certain band allocations, modes and power limits.

Like any privilege, we must exercise certain responsibilities to ensure mature and mutual cohabitation on the RF spectrum.  Obviously, no-one wants to “clobber” other stations or cause unnecessary or unintended interference to others on the bands.

How should we go about this?

A part of the answer to this is, of course, band plans.  Band plans have been agreed internationally by members of the three IARU Regions in co-operation with individual member countries.  Some countries have variations within these band plans due to local regulations and nuances brought about by political and geographical influences.

These band plans will typically set out what modes should be used within each band segment.

It is worth noting that the band plan is not owned by any one representative body.

It is the Australian band plan.

All users are welcome to comment on band plans.  They are constantly evolving. 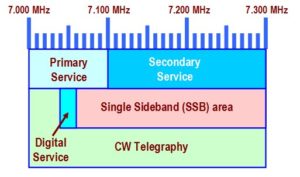 How does this play out in the real world?

Looking at the above band plan it should all be very clear about how and where we operate on the bands.

Alas, the world is not that simple and human behaviour does not always comply with the rigidity of rules, guidelines and laws.  Similarly, guidelines in one region or country will not always align with those of another.

CW is permitted over the entire band allocation.  However, in reality, 95% of CW operators tend to gravitate towards the bottom 30kHz of the band.  There are a few exceptions; like crystal locked QRP frequencies  and the occasional signals further up the band.  CW signals  operate in a very small bandwidth and, like digital modes, reception techniques and DSP filters allow considerable QRN and QRM to be rejected.

CW generally is the best regarded mode of operation when it comes to band plan compliance and general consideration of other modes.

Digital modes are, in many respects, the way of the future.  For various reasons, some digital modes have “parked” themselves outside the agreed band plan for Region 3. Two relevant examples are the two most popular digital modes; WSPR and FT-8.

WSPR, the Weak Signal Propagation Reporter is centred on 7038kHz.

The most used mode, FT-8, is on 7074kHz – right in the middle of the most popular part of the Australian SSB segment, and just off the national WICEN frequency.

For whatever reasons, the IARU and individual country representatives have not approached the co-ordinators or “leaders” in these modes during their development and deployment.

These two weak signal modes have become entrenched a little below and above the agreed digital segments of the Australian band plan. There are now tens of thousands of stations using these modes on these frequencies.  FT-8, in particular, is incredibly popular.

The FT8 frequency of 7074 kHz is within the digital segment of the US Band Plan – which has digital modes from 7000-7125 kHz and SSB above that.

So, the busiest digital mode is now operating in what was prime SSB territory for Region 3.

What should users operating, say, a long-term SSB net on 7075 do?  Continue on, in blissful ignorance and suffer/cause tremendous QRM?

Or just spin that big VFO knob up 10 kHz?

We know what we would do…..

Contests of all types have always generated controversy.  Amateur Radio is no exception.  Contesters are very passionate and are well known for pushing operating and performance (both equipment and human) to their limits.  This includes the limits of the band plan.

Recently, during a RTTY contest, very strong multiple RTTY signals were observed on 7065 kHz.  In spite of this, a regular club net came up on the frequency and persevered .  After all, it has been their net frequency for years, if not decades!

Sure, the RTTY operators should not have been on that frequency according to the band plan.  But the reality is that contesting will see operators stray above the assigned band plans due to congestion.

In the example above, there were plenty of unused frequencies above 7065 kHz.  Why not simply spin the big dial?  We have that privilege.  Contests are a big part of the hobby these days.  There are plenty of options for the rest of us to QSY, or even move to a WARC band (where contests are not allowed).

Whether its RTTY contests, Digital Modes, a weak CW signal or a DX station, why not spin that dial…..?

None of us “own” frequencies.  We have an amazing set of privileges.  We must be better at cohabitating and being considerate.  Especially when we have the opportunity.

Aim to abide by the band plans, but recognise that there will be times we all need to be considerate to other fellow radio enthusiasts….